A warning to claimants to act promptly against insolvent defendants 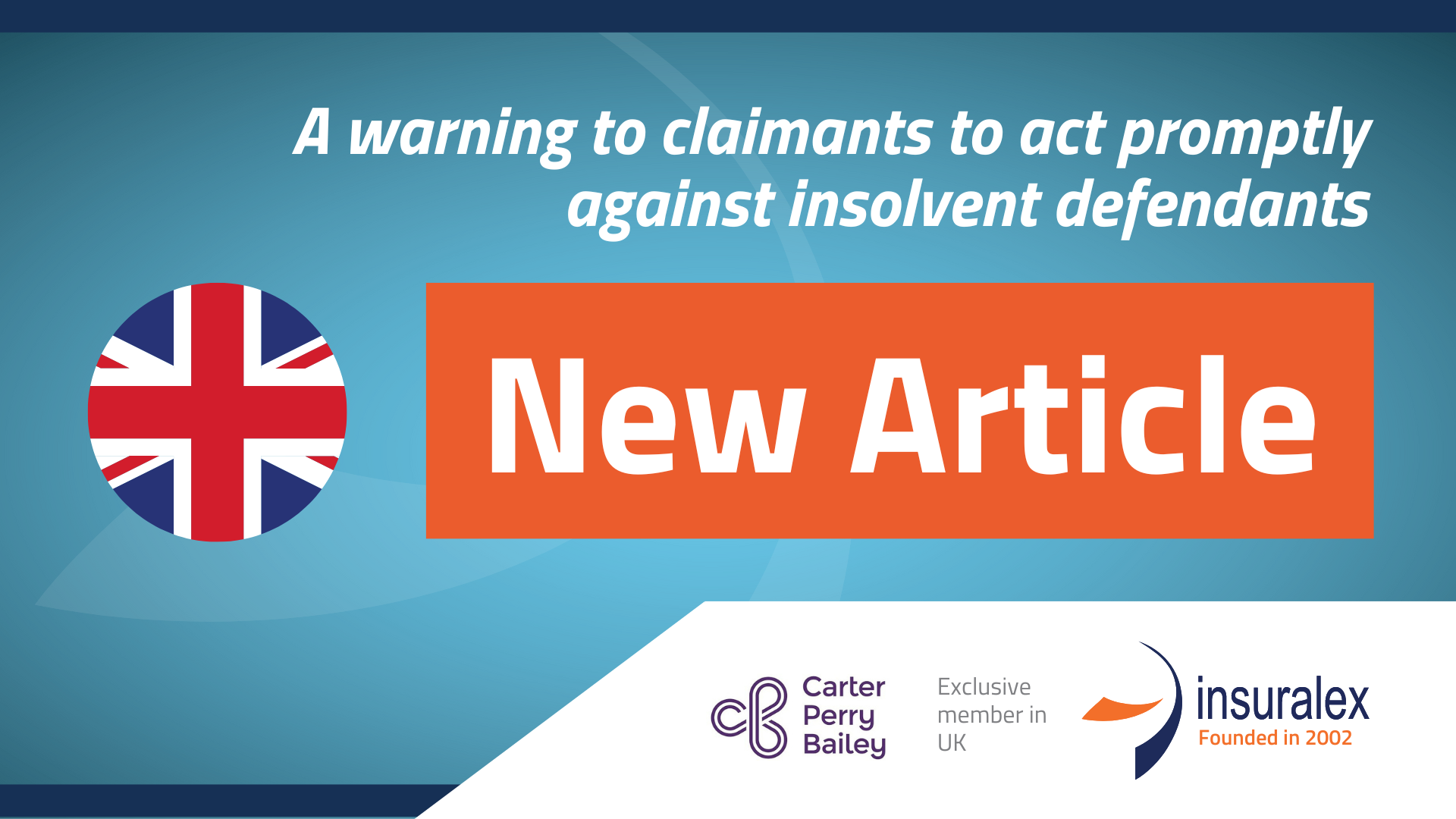 In the cross field between Civil Procedure Rules, Insurance law and Insolvency law an issue exists regarding who should be named as the defendant in liability proceedings when the insured becomes insolvent prior to the end of the limitation period.  Ordinarily, a third party must proceed against the tortfeasor directly.  If liable (and insured), the insurer will provide an indemnity.  Where the tortfeasor is insolvent, this leads to an undesirable situation:  where a third party secures judgment against an insolvent policyholder it is treated the same as any other creditor with recovery limited to a share of the residual estate.  Any indemnity becomes part of the estate and benefits all creditors equally.

The issue of limitation

The statutory right of direct action against insurers has raised a question mark as to how the Limitation Act 1980 should be applied.  As a matter of insolvency law, the “General Rolling Stock” principle[1] prescribes that, insofar as it has not already expired, limitation will cease to run on the date that the company enters insolvency procedures.  The question was, therefore, whether limitation in respect of direct claims against insurers should also be suspended where the insured is insolvent.

This issue was considered by the Court of Appeal in the context of the 1930 Act in Financial Services Compensation Scheme v Larnell (Insurances) Limited (in liquidation) [2005] EWCA Civ 1408 (“Larnell”).  The claimant alleged it received negligent pension advice.  Proceedings were issued after the expiry of the “long-stop” limitation period per Section 14(b) of the Limitation Act 1980.  However, prior to the expiry of this deadline, the shareholders of Larnell passed a resolution for the winding-up of the company.

At the time, it was settled case law that “the third-party had to establish that the insured is liable to him before he can take advantage of the rights afforded to him under the 1930 Act”.

The Court found that if the third party’s claim was not barred under the Limitation Act at the date of the winding up order, the claim was a liability for the purposes of s.107 of the Insolvency Act 1986, with limitation suspended on account of insolvency.  If the claim was then successful, the third party would be able to claim against insurers by virtue of the 1930 Act.

Does Larnell still apply under the 2010 Act?

The case arose from the negligent installation of cavity wall insulation.  Following the insured entity becoming insolvent, a direct claim was subsequently brought against insurers, who raised a limitation defence, as the ordinary limitation period had expired between the insolvency of the insured and the date on which proceedings were issued.

The Court had to consider whether the amendments introduced by the 2010 Act had altered the position on limitation as set down in Larnell.  The defendant made the following points:

2. Under the 2010 Act, there are no risks of “mixed claims”, i.e claims against both the policyholder and the insurer. If parts of the claim are not covered under the insurance, the claimant can prove any shortfall in the liquidation.

3. Applying Larnell under the 2010 Act would create an indefinite limitation period. Once a company is wound up, it will be struck off the register.  When pursuing normal company debts, there is the option to restore the company during the following six-year period for the purpose of issuing proceedings against it.  At the end of the six-year period, the time for bringing the claim against the (former) company expires.  This means there is a “long-stop” to limitation.

If Larnell applied under the 2010 Act, third parties would, potentially, have a direct claim against insurers, in respect of which limitation is suspended at the point of the insured’s insolvency.  Accordingly, there would be no time limit to when a claim could be brought against insurers.

Although the issue of limitation under the 2010 Act had not previously arisen in reported case law, the Court was referred to five County Court decisions which had considered the point.  All reached the same conclusion: that the judgment in Larnell can be distinguished and, under the 2010 Act, limitation is not paused by insolvency proceedings in respect of direct claims against insurers.

In Larnell, it had been a significant factor that the third party had to establish liability against the negligent policyholder before the direct right of action arose against the insurer.  This is fundamentally different to the position under the 2010 Act, where a right of action exists once insolvency proceedings have commenced.

Whilst the judgment in Rashid is only a County Court decision, it illustrates a consistent approach within the lower courts that limitation will not be suspended by insolvency procedures under the 2010 Act.

It remains to be seen whether this issue will be considered by a higher Court. In light of events in recent years, and with the country being on the brink of an anticipated recession, this may well become a more prevalent issue in future litigation.

Insurers should welcome this judgment. By ensuring claims have a “long-stop” date, insurers are able to manage their risk exposure and ought not to be required to defend historic claims relating to dissolved companies.

If you have any questions regarding the issues highlighted in this article, please get in touch with Simon or Lisbeth. You can also review a range of articles on similar insurance and reinsurance topics in the Publications section of our website.