Civil liability, vaccination, and vaccines: a European and national perspective 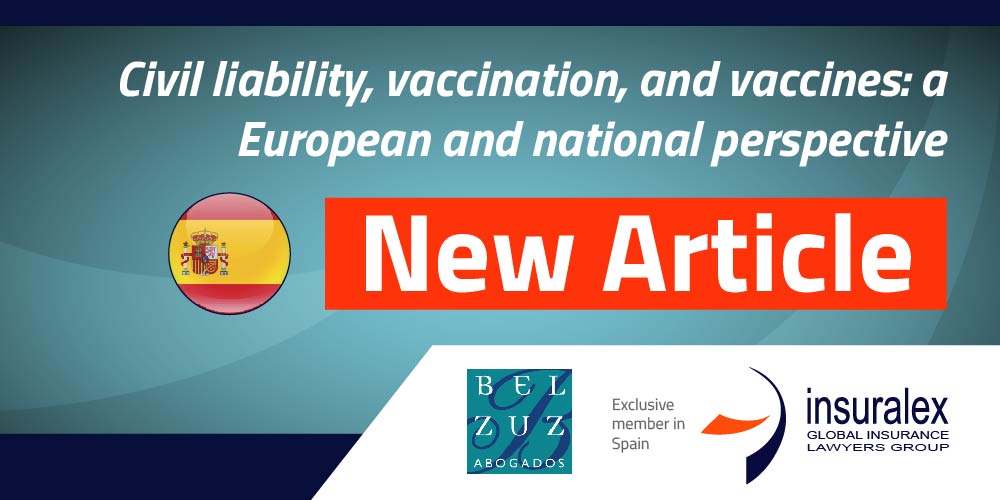 We are currently living what can be considered the most important massive vaccination campaign in the recent history of humankind. Scientific advisors and governments from all over the world have assured that the COVID-19 vaccine is effectively and technically safe. However, is COVID-19 vaccine also safe from a legal perspective? What is the civil liability regime in the specific domain of medicines? And vaccination?

This analysis hinges on a European Union Law perspective with special attention to the legal regime and case law related to civil liability in Spain.

Vaccines are chemical compounds of complex manufacturing that are subject to strict quality and safety controls. Despite the number of successive controls, vaccines are not exempt from risk and adverse events that are technically labelled as “Adverse Reaction” (“AR”).

Vaccines, as any other medicine, are subject to quality and safety controls at three different levels: (i) the pharmaceutical company (during research and development (i.e., clinical trials) and during the manufacturing process), (ii) the European Medicines Agency and the different European medicines agencies (in Spain, the AEMPS2, during pre-marketing and marketing stages) and, last, (iii) the pharmacovigilance system at the European and national level.

The above-mentioned Directive 2001/83/CE, and Regulation 726/2004 establish the legal framework for authorisation and control of medicines in the European Union. In a rough sketch, the application for the authorisation of a medicine (in our case, vaccines) is divided into four parts: (i) the dossier, (ii) chemical, pharmaceutical and biological trials, (iii) further toxicological and pharmaceutical testing and (iv) the clinical trial dossier. In each one of these parts, it is required to provide data on active substances and excipients (pre-manufacturing phase), the outcome of different tests performed on materials in the intermediate phase (manufacturing) and on the final product (toxicity and stability). Despite all these quality and safety measures, can we affirm that vaccines are 100% safe?

The experience and historical record bring to the conclusion that vaccines are extraordinary safe medicines. Vaccines are not only marketed after a strict verification and controlling process as any other medicine for human use, but they are also subjected to enhanced quality and safety controls as “biological medicinal products” (among them, immunological medicinal products and, thus, the vaccines). However, as any other medicine, there are adverse effects that are known and, sometimes, some unknown and unexpected adverse effects. So, what is the civil liability regime for damages caused by a vaccine?

Secondly, it is important to make the difference between vaccines’ AR and vaccines’ defects. The civil liability regime differs when harm is caused by a defect on a vaccine or when harm is related to a known AR. In the first scenario, consumers and users’ protection legal framework can be applied to the manufacturer of the vaccine (and the Insurer) while in the second scenario, the boundaries and effects of the national legal framework must be determined.

The Ruling of the Court of Justice of the European Union of June 21st, 2017, in the case C-621/15 “W and others” against “Sanofi Pasteur and others” reminded that, even according to the consumers and users harmonised European legal framework, the specific civil liability legal regime, as well as the evidence legal regime, is regulated at the national level.

This highly controverted Ruling stressed that, as far as the European consumers and users’ legal framework protection is not jeopardized, indicative evidence can be construed by the national courts to consider that a vaccine does not offer “a particularly high level of safety”. In the words or the European Court of Justice: “notwithstanding the finding that medical research neither establishes nor rules out the existence of a link between the administering of the vaccine and the occurrence of the victim’s disease, certain factual evidence relied on by the applicant constitutes serious, specific and consistent evidence enabling it to conclude that there is a defect in the vaccine and that there is a causal link between that defect and that disease.”

Likewise, the Ruling of the Court of Justice of the European Union as of March 5th, 2015 in the case C-503/13 and C-504/13 regarding Boston Scientific Medizintechnik GmbH and a defective medical device (a pacemaker) stated that: “where it is found that products belonging to the same group or forming part of the same production series, (…) have a potential defect, such a product may be classified as defective without there being any need to establish that that product has such a defect.”

In other words, according to a strict interpretation of the case law of the Court of Justice of the European Union, a defective vaccine’s batch can be construed as an indicative evidence of the vaccine to be defective. However, the proposed analogy between medical devices and vaccines can be challenged; therefore, the above-mentioned interpretation of the European case law should be assessed on a case-by-case basis.

In Spain, the consumers and users’ protection legal framework establishes an objective civil liability regime for medicinal products according to Articles 135 and 140.3 LCyU4.

Even if the Spanish legislation generally exonerates responsibility for damages that could not be foreseen according to the state of Science at the time of marketing (“development risks”, Article 140 LCyU), medicinal products are excluded from this general rule. Therefore, the harm produced by a defective vaccine must be compensated by the manufacturer in any case.

Once we have analysed the civil liability regime of a defective vaccine, what happens when harm is not a consequence of a defect but an AR to the vaccine? Is the pharmaceutical company liable for the damages caused by an AR?

The European legal framework remains silent to these questions. It is the different national regulations which determine the legal scenario of damages compensation. In Spain, the Supreme Court’s case law throws some light on this.

The general rule, according to the Supreme Court’s case law, is that pharmaceutical companies are not liable for the damages caused by a known AR that is included in the prospectus of the medicinal product.

The cornerstone of the civil liability regime of vaccines in Spain (excluding defective vaccines) is the information provided to the patient and/or the healthcare professionals. If the known risks of the vaccine have been included in the prospectus and in the assessment report, the pharmaceutical company can be exonerated from responsibility.

The Rulings of the Civil Chamber of the Supreme Court as of May 28th, 2012 and June 17th, 2011, concerning the so-called Agreal® established: “along with the labelling, the assessment report and the prospectus are included in the fundamental right to be informed according to healthcare law. And it has been proved that the Agreal® caused adverse effects (…) that were not included in the prospectus or in the assessment report (…)”.

In sum, vaccine’s known AR that cause harm and that are included in the prospectus and the assessment report exonerate responsibility from the pharmaceutical company as far as the quality and safety manufacturing obligations are met.

By contrast, in case an unknown or an unexpected AR happen, according to the Spanish case law and the consumers and users’ protection legal framework, the pharmaceutical company cannot be exonerated as per Article 140.3 LCyU.

Courts have been struggling between the (i) “mutualization” of risk or risk-sharing and (ii) the limitation of the Administration civil liability according to a lex artis criteria. What is the position of the Supreme Court in this debate?

On one hand, in the recent Rulings of the Contentious-Administrative Chamber as of December 21st, 2020 and January 21st, 2021, the Supreme Court had the chance to recall that the civil liability regime of the Public Administration is not only a compensatory mechanism, but also a concrete manifestation of the principle of solidarity. According to the most recent Supreme Court’s Rulings, it is reasonable to assume the “mutualization of risk” or risk-sharing thesis, according to which the Public Administration must pay compensation for the damages caused during a vaccination campaign that aims to benefit the bulk of the population.

Indeed, the Supreme Court, in the Contentious-Administrative Chamber’s Ruling as of October 9th, 2012, when dealing with severe and permanent AR: “(…) the case can be construed as a social burden that the claimant is not obliged to individually bear. On the contrary, this social burden must be shared by society, as this is a consequence of social consciousness and the fair distribution of most of the benefits and unpredictable prejudices that may arise from a vaccination campaign”.

This approach to the civil liability regime derived from vaccination campaigns has been shared by lower Courts. The Ruling of the Contentious-Administrative Chamber of the High Court of Justice of Valencia as of December 18th, 2010 granted compensation for “severe and permanent AR” because “(…) otherwise, there would be an individual sacrifice in favour of society’s collective health damaging the physical integrity of the individual and neglecting the fundamental right to the protection of life and physical integrity recognised by the Constitution”.

In sum, according to the Supreme Court’s case law, severe and permanent damages caused to individuals during a vaccination campaign must be compensated by the Public Administration according to the principle of solidarity.

Considering the above, the articulation of a civil liability regime concerning vaccines (as a medicine) and vaccination (as a public service) makes the whole system safe from a double legal perspective: (i) the quality and safety of vaccines and (ii) the existence of a compensatory mechanism in case unknown or unexpected AR may arise. Therefore, we can affirm that, according to a legal perspective, mistrust towards the COVID-19 vaccine is unfounded. Now, it is the task of others to get the ball rolling and to ensure that the COVID-19 crisis is overcome while nobody is left behind.

3 See the codification processes of the nineteenth century in Europe (i.e., the Civil Code in Portugal, Spain, Italy, France, and Germany, among others).

5 The vaccination civil liability regime excludes the scenario of a defective vaccine. As analysed in the former section, if a vaccine is defective, the pharmaceutical company is hold liable.