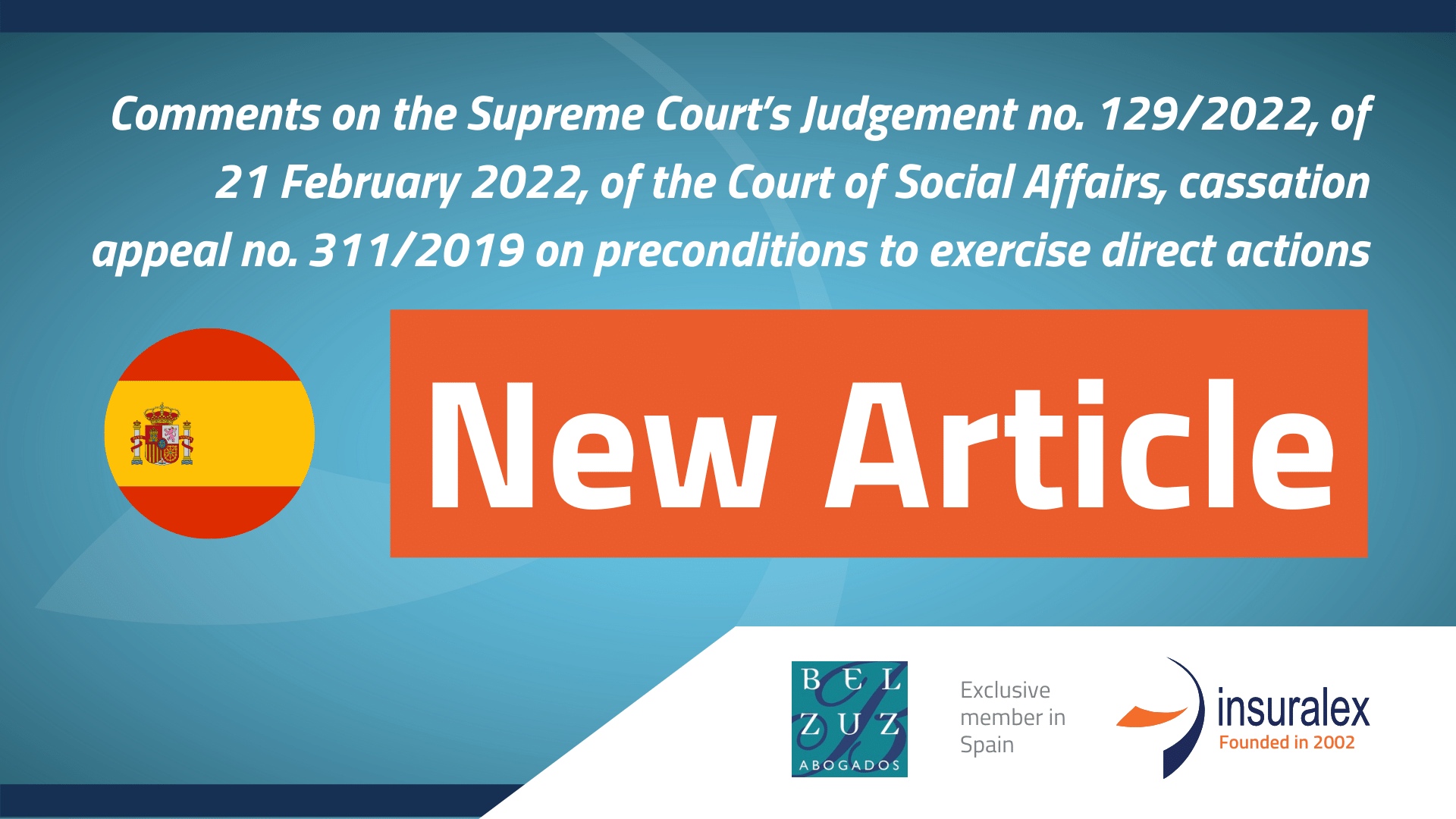 We find ourselves before a case in which the party injured by some events exercises the direct action provided in art. 76 of the Spanish LCS and doesn’t prosecute the policyholder causing them. The Supreme Court repeats that in civil liability insurances it is necessary that previously the policyholder’s civil liability exists in order that the direct actions may success, which means a precondition of determination of liability for the party responsible for the damages.

In the claim by the claimant, it is claimed a compensation for a personal injury, a tibia-fibula fracture, which was sustained while training service dogs as a trainer. The claimant was hired by the Spanish Organisation ONCE. Her claim was only issued to the insurance company for the policy taken out by the dog’s owner.

After examining the policy, the insured risk guarantees “the payment of compensation that the policyholder is legally required to make for the extra-contractual civil liability for personal injuries and/or damage to property and consequential damage to third parties in their capacity of the owner of the dogs covered by this policy.”

Additionally, puppy trainers are also covered by the policy, as well as the persons usually living in the domicile, with regards to foster dogs under the agreement signed by the policyholder.
In that context, the damaged claimant brought a claim, exercising direct action, before the court of social affairs that was dismissed, but then appealed and found well-founded on the basis that “there was no legal charge for the entity owning the animal, from the policy contents (third party) a contributory fault was observed (ONCE’s, which arises from the risk of having and training a puppy and the one described by the claimant).

This statement is admitted by the SC that allows the cassation appeal and recalls the doctrine on these matters which is sustained by judgements 469/2001, of 17 May, and 579/2019, of 5 November, through which it declares:

“…that in civil liability insurance if there is no civil liability related to the policyholder, in such a way that their estate may be affected under a legal charge implying that they are liable for damages (art. 1911 of the Spanish Civil Code), the insurer may not be liable.”

And plead the judgement stating:

“If it were pleaded that way, it would entail damages going differently than provided by the parties when taking out the insurance. There cannot be a liability just for the sake of insurability, so the existence of an insurance policy provides cover to damages claims beyond the law and the agreement, as required by art. 73 of the LCS for the cover’s operability subject to proceedings”.

It is stressed that, in the event of this kind of insurance agreement, the policyholder’s liability and civil liability insurance are two close linked or interdependent concepts, insofar as the taken-out insurance covers the risk arising from a financial burden, which entails for the policyholder the obligation to indemnify a third party for damages.

We can conclude that declaring the existence of the policyholder’s civil liability is a basic precondition for the direct action to success against the insurance company.

Conclusion. – As stated by the Court, conveying such considerations on the controversial matter, it is concluded that an insurance cover cannot exist, taking into account the second instance judgement on the dog, owned by the ONCE foundation, not having an influence on the origin of the damage, and therefore there is no legal charge on the entity owner of the animal (evaluation of intangible evidence on cassation appeal).