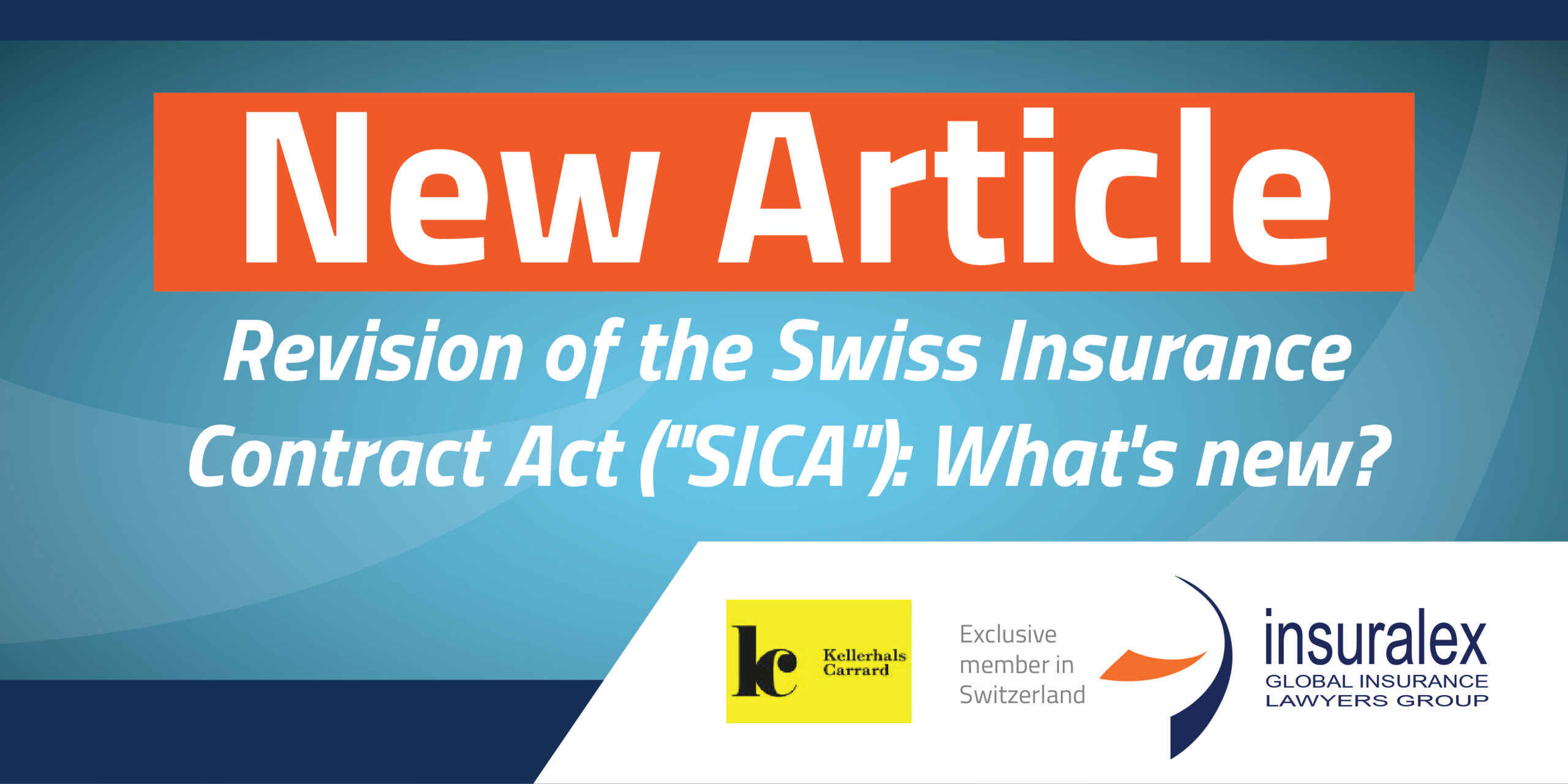 1. INNOVATIONS AT A GLANCE

This newsletter provides an overview of the most important practical changes to the revised SICA, which is expected to come into force on 1st January 2021. The revision brings, among other things, innovations in the area of the provisions for conclusion and termination of contracts, the limitation periods, the protection of insurance benefits and the direct right of action and integral recourse in liability insurance.

2. FORMATION OF THE INSURANCE CONTRACT AND DUTIES TO INFORM

Furthermore, an unlimited cover note can be cancelled with a notice period of 2 weeks. In practice, such a procedure is already widely used today. The new Art. 9 SICA will be made partially mandatory pursuant to Art. 98 SICA.

In addition, new stricter information requirements apply on the part of the insurance company. For example, Art. 3 para. b SICA provides for an extended duty of information regarding the period of notice of claim or the existence of sum or non-life insurance.

3.1 Absolute period of notice of 2 years in case of violation of the duty to inform

The policyholder’s right to terminate the policy remains unchanged in the event of a breach of the duty of information by the insurance company with a relative period of 4 weeks from the date of knowledge of the breach of duty. Art. 3a para. 2 SICA now provides for an absolute period of 2 years instead of the previous 1 year from the breach of the pre-contractual obligations set out in Art. 3 SICA.

Even if a longer term of contract has been agreed, policyholders and insurance companies are generally entitled to termination of the contract at the end of the third year or each subsequent year, subject to a notice period of three months, with the exception of life insurance. However, the parties may agree that the contract may be terminated before the end of the third year. In this case, according to the new Art. 35a SICA, the agreed periods of notice must be identical for both parties.

3.3 Extraordinary termination for good cause at any time

The new Art. 35b SICA codifies already existing federal court rulings. Accordingly, an insurance contract can be terminated at any time if unforeseeable regulatory requirements make it impossible to fulfil the contract or if circumstances prevail which make it unreasonable to expect continuing the contract in good faith from the party terminating the contract.

3.4 Extension of the insurer’s right to terminate the collective daily allowance insurance

3.5 Mitigation of risks and right to terminate

The new Art. 28a SICA, which was highly controversial within the legislative process, gives the policyholder a right of termination with four weeks’ notice in the event of a significant reduction in risk.

3.6 Right to terminate in case of multiple insurance

The currently valid Statute sets forth the consequences of a breach of obligations in Art. 29 para. 2 SICA and Art. 45 para. 1 SICA. Although Art. 29 para. 2 SICA remains unchanged, Art. 45 para. 1 SICA has been revised. Accordingly, no detrimental consequence shall result from a breach of a contractually agreed obligation if the violation happened without fault or the policyholder can prove that the breach had no impact on the occurrence of the feared event and the scope of the insurance benefit. Up until now, questions on the legal nature, on the prerequisites (causality requirement and/or culpability), on the burden of proof and also on the legal consequences (“all or nothing” principle or fault-based cutback) have been contested in the doctrine and in practice. Unfortunately, the upcoming partial revision will still not remove all the ambiguities. The legal provision of an “all or nothing” principle remains admissible. An appropriate reduction in the negative legal consequences related to the extent of the fault is therefore not expressly provided for even in the revised version of SICA. In addition to this, the different regulation on the burden of proof in Art. 29 para. 2 SICA and the new Art. 45 para. 1 SICA will cause further uncertainty.

The provisions on breach of the duty to disclose material facts will undergo a further major change. For instance, the “obligation to notify”, i.e. the policyholder’s obligation to report any changes to an already disclosed risk, previous to the actual formation of the contract, is no longer applicable under the revised Art. 6 para. 1 SICA.

In addition, Art. 6 para. 3 SICA now provides for a causality-based or quota-based (partial) exemption from benefits on the basis of a proven breach of the duty to disclose material facts: “If the contract is terminated by cancellation in accordance with para. 1, the insurer’s duty to pay benefits for losses that have already occurred shall also lapse if the insured event’s occurrence or extent has been influenced by the disclosure or incorrect disclosure. To the extent that the insurer has fulfilled the obligation to pay benefits, the insurer is entitled to reimbursement.”

Pursuant to Art. 46 para. 1 SICA, claims arising from the insurance contract are now subject to a 5-year limitation period as from the date of the event triggering the insurer’s duty to pay benefits. An exception is made for benefits from daily sickness benefit insurance, for which a period of 2 years applies as before.

The new Art. 35c SICA will in future prohibit clauses which, upon termination of the contract after the occurrence of the insured event, enable an insurance company to unilaterally limit or cancel as a result of illness or accident existing periodic benefit obligations in terms of duration or scope.

Up to now, retroactive insurance policies, with the exception of fire and transport insurance, have been null and void in principle. With the revised provision of Art. 10 SICA, the possibility of retroactive insurance, i.e. an insurance contract with effect from a point in time before its formation, is permitted if an insurable interest exists. A retroactive insurance shall be void only if the policyholder or the insured knew or should have known that an insured event had already occurred. In other words, the intended provision allows for “impossible” contracts when both parties do not know that the insured event has already occurred. Whether such cases can be solved pursuant to the general rule of Art. 20 Swiss Code of Obligations („OR”) concerning nullity is questionable.

As a new provision, the injured third party or his legal successor will have a direct right of action against the insurance company within the scope of any existing insurance cover and subject to the objections and defences which the insurance company may raise against plaintiff on the basis of the law or the contract (Art. 60 para. 1bis SICA). The conditions that the legislator initially wanted to attach to such a direct right of action were dropped by the same afterwards.

Such a direct right of action is basically nothing new, but has previously only been available under special liability rergimes (such as e.g. Swiss Road Trafffic Act).

8.2 Integral right of recourse for property and causalty insurers

The Councils agreed that Art. 72 of the SICA, which was previously in force, should be considered obsolete and that the non-life insurer’s integral right of recourse, which had already been anticipated by the Federal Supreme Court, should be stipuladed under the new Art. 95c SICA. Until now, i.e. until the landmark ruling of the Federal Supreme Court (BGE 144 III 209), insurance companies that contractually agree to cover a loss were subject to the cascade of recourse provided for in Art. 51 para. 2 OR. The insurance company was thus at the middle level of recourse in the position of a “contractually liable party”, which meant that it was denied a right of recourse against the party being liable regardless of negligence or fault. With the revised Art. 95c para. 2 SICA, the integral right of recourse (analogous to Art. 72 General Part of Social Insurance Statute, „ATSG”) is introduced for the insurer. Further, the right of recourse against responsible grossly negligent persons being closely related to insured party and, for instance, living in the same domestic community, can now be claimed on the basis of recourse provision Art. 95c SICA, to pay the insurer to the extent it has already covered the damage.

It is also agreed that Art. 95c para. 1 and 2 should be deemed an absolutely mandatory and para. 3 a relatively mandatory provision.

The Councils agreed that the clauses aiming at exclusion of recourse cover (so-called “Suva clauses”), which have been common in insurance practice up to now, should no longer be admissible in future. Apart from compensation claims by the injured parties, likewise, the liability insurance will now explicitly cover recourse claims by third parties (e.g. claims from social insurers) in accordance with Art. 59 para. 2 SICA. In addition, pursuant to Art. 59 para. 1 SICA the liability insurance shall not only cover the liability of the representatives of the policyholder and the persons entrusted with the management or supervision, but also all other employees of the policyholder’s place of business. Moreover, according to Art. 59 para. 3 SICA, the aforementioned standard shall not be amended to the detriment of the beneficiary.