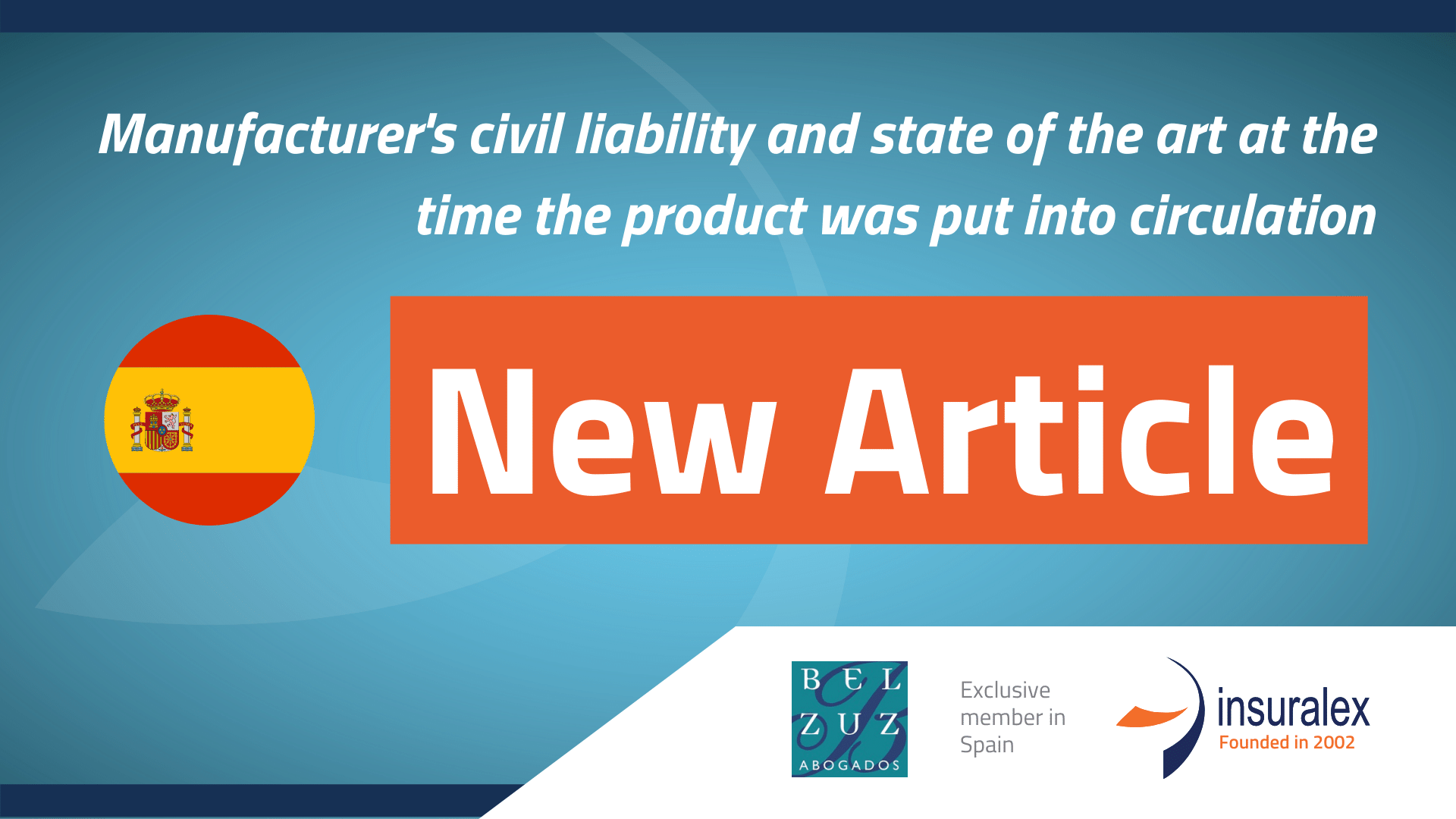 We face a scenario that most likely could take place, especially nowadays, when the state of the art rapidly changes in short periods of time.

Technical knowledge available under the state of the art, at the time of manufacturing, may change after launching the product in the market. The issue is whether the manufacturer of the product may be held liable against the damages to the final consumer, where according to the state of the art it wasn’t possible to detect defects, otherwise they would have been corrected and the product changed before its launch.

Generally, the manufacturer cannot be held liable for the claimed damages arising from the product application if the defects found were undetectable according to state of the art at the time of their launch in the market.

The health-care product concerned was compliant with the provided requirements of the European (and Spanish) Law before its launch. On the other hand, the product has the corresponding ISO compliance certificate and the CE marking in accordance with the certificate issued by the Notified Body, with a risk classified as moderate.

With the CE marking, the compliance with the requirements of the European standard is certified in order to market the product and it allows putting it into service, its free movement and marketing throughout the European Union.

This standard describes the procedure to detect the product’s cytotoxicity in vitro of medical devices, using mouse fibroblast.

Every batch of the health-care product X® were analysed in accordance with the European standard and they passed the checks applicable at the time of launch in the market, and therefore, there was no item or suspicion regarding the product that may have been classified as toxic or unsuitable for marketing.

– According to standards UNE-EN ISO 10993-5:2009 and UNE-EN ISO 10993-12:2007, cultures are made with a cell line non-specific of human cells
– The first cultures, in accordance with the requirements of the UNE standard, were made with mouse fibroblast, instead of human cells and the findings obtained were NON-toxic
– The quality and safety control system for the health-care product laid down by law and the required quality standard has a lower sensitivity and specificity than the method followed by the IOBA.
– The conclusion of the trial complies with the legislation at the time of the health-care product launch, it was impossible to detect toxicity in the health-care product X. There were a number of technical limitations (within the quality and safety control standard) that prevented knowing the potential toxicity of the product X in the human tissue cells.

Therefore, we understand that the manufacturer cannot be held liable for the product X, since they have complied with every legal obligation and have acted in a diligent way, and the trials made under the applicable standard UNE-EN ISO 10993 and the state of the art didn’t help to detect the potential toxicity of the health-care product.

Article 11(2) of the Royal Legislative Decree 1/2007, of 16 November, approving the Consolidated Act for the Protection of Consumers and Users and other complementary acts (hereafter, the “LCyU” or “RD 1/2007”), defines as safe products:

(2) Goods or services which, under normal or reasonably foreseeable conditions of use, including their duration, are deemed to be of no risk to the health or safety of persons, or only the minimum risks compatible with the use of the good or service and considered admissible within a high level of protection of the health and safety of persons.

“Defective product shall mean any product which does not provide the safety that it could legitimately be expected to provide, taking all circumstances into account, especially the presentation of the product, its reasonable foreseeable use and the time when it was placed on the market.

It is acknowledged, according to article 140.1 e), that producers shall not be liable provided that:

“(…) the state of the scientific and technical knowledge at the time the product entered into circulation meant that the existence of the defect could not be perceived.”

In this case, according to applicable legislation and the considerations set out by the analysing scientific body, we find a limitation on the state of the art, that holds the manufacturer harmless against any liability in accordance with article 140 LCyU.

We highlight the Plenary ruling of the Civil Chamber of 9 December 2010 (EDJ 2010/269061) where it is stated that: “Article 6 LRCPD establishes, among grounds for exemption from liability (including the so-called exception for development risks), that the manufacturer or importer shall not be liable if they prove “that the state of the scientific and technical knowledge at the time the product entered into circulation meant that the existence of the defect could not be perceived.” This exception is also objective.

Ruling by the Malaga Provincial Court, of 14 June 2016 (EDJ 2016/219841): “…they may only be held harmless against any liability when it is proved that the lack of checks accounts for the fact of not being required, in accordance with the state of the scientific and technical knowledge at the time the product entered into circulation…”

Other construction: according to the state of the art at the time of the launch of the health-care product X®, defects present in some batches of the product (not all) were undetectable, and that’s why the manufacturer cannot be held liable.

It is not an issue of quality and safety control of the product, because only some batches have been harmful, which are actually the ones defectively manufactured rather than the controlled product which was correctly designed.

In this case, it is deemed that there is no legal effect in this scenario, because the defect is not present on the product, which has been smoothly marketed so far, but on the use of a particular batch. The manufacturing of the other batches shows that the state of the art allowed to see the existence of the defect.

CONCLUSION: Article 140 LCyU includes as grounds for exemption from liability “the state of the scientific and technical knowledge at the time the product entered into circulation meant that the existence of the defect could not be perceived.” In the case described, the studies conducted beyond the requirements of the existing ISO standards of quality control certainly found defective batches, but were undetectable in compliance with the quality checks and applicable ISO standards. Therefore, the manufacturer cannot be held liable for launching defective batches as a lack of diligence, because the defects were undetectable under quality control. The Government and European standards are ultimately liable for allowing the launching of products without establishing protocols and quality checks, which allow to detect potential defects. For this reason, the body IOBA that conducted the screening tests recommends a change: “it shows that findings attest “the need of introducing legislative changes for toxicity assessment in this kind of compounds within the scope of the European Union, developing trials closer to the clinical use of substances.”