PERU: GOOD NEWS ON THE VALIDITY OF CLAIMS MADE CLAUSES 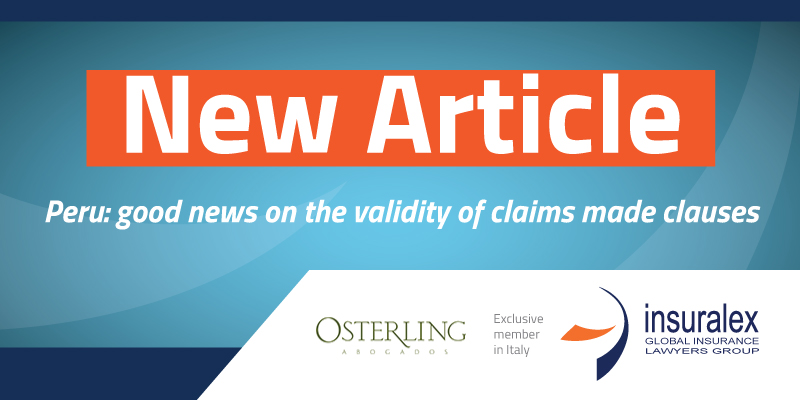 Osterling Abogados, Insuralex´s exclusive member in Peru, advised the Peruvian association of insurance companies when making their case for the regulator to reconsider an opinion formerly issued against the validity of “claims made” clauses included in liability policies.

In recent days, the Peruvian Superintendence of Banking, Insurance and Pension Funds Administrators (SBS as per its Spanish acronym) published a draft bill, currently open for public comment, that regulates the validity of “claims made” clauses in Peru. This will bring to an end to a legal uncertainty that significantly affected the industry.

The polemic arose from a non-binding opinion issued by the SBS a few months ago –in response to a query made by a law firm on the validity of the “claims made” clauses– in which they established that the aforementioned are null and void under Peruvian law.

Once such opinion came to the attention of the local insurers, as well as of leading reinsurers with businesses in Peru, and in spite of its non-binding nature, it caused the retrenchment of the market. The issuance of liability policies that include “claims made” clauses has been shrunk to a minimum for several months.

The Peruvian Association of Insurance Companies (Apeseg, as per its Spanish acronym) instructed Osterling Abogados, Insuralex´s exclusive member in Peru to issue a report on the legal grounds supporting the validity of “claims made” clauses, on the basis of which they made their case for the SBS to reconsider its position.

Under a proper construction of the current law, the report stated beyond doubt the validity of “claims made” clauses. In fact, insurance based on the same principle has been permitted under Peruvian law since the beginnings of the twentieth century and it is expressly foreseen in Articles 3 and 105 of the Insurance Contract Act.

Indeed, “claims made” clauses do not give rise to any effect on the nature of the insurance contract, since the coverage of the policy depends on two factors: (i) the loss must occur within the retroactive term agreed in the liability policy (provided that the policyholder is unaware of the loss at the moment of taking the policy), and (ii) the third party must claim to the insured within the policy term.

Also, “claims made” clauses do not collide with the statute of limitation for claims arising from insurance contracts (10 years). This is because under “claims made” basis, a third party is the one which must claim to the insured within the policy term. On the other hand, the statute of limitation refers to the term within which the insured may take action against the insurer on any right stemming from the insurance contract. They are two different claims.

Our joint effort has paid off and SBS has revised its opinion concluding that “claims made” clauses included in liability policies are valid in Peru. Once the public comment phase is closed and the feedback received is assessed by the regulator, the bill will be enacted.