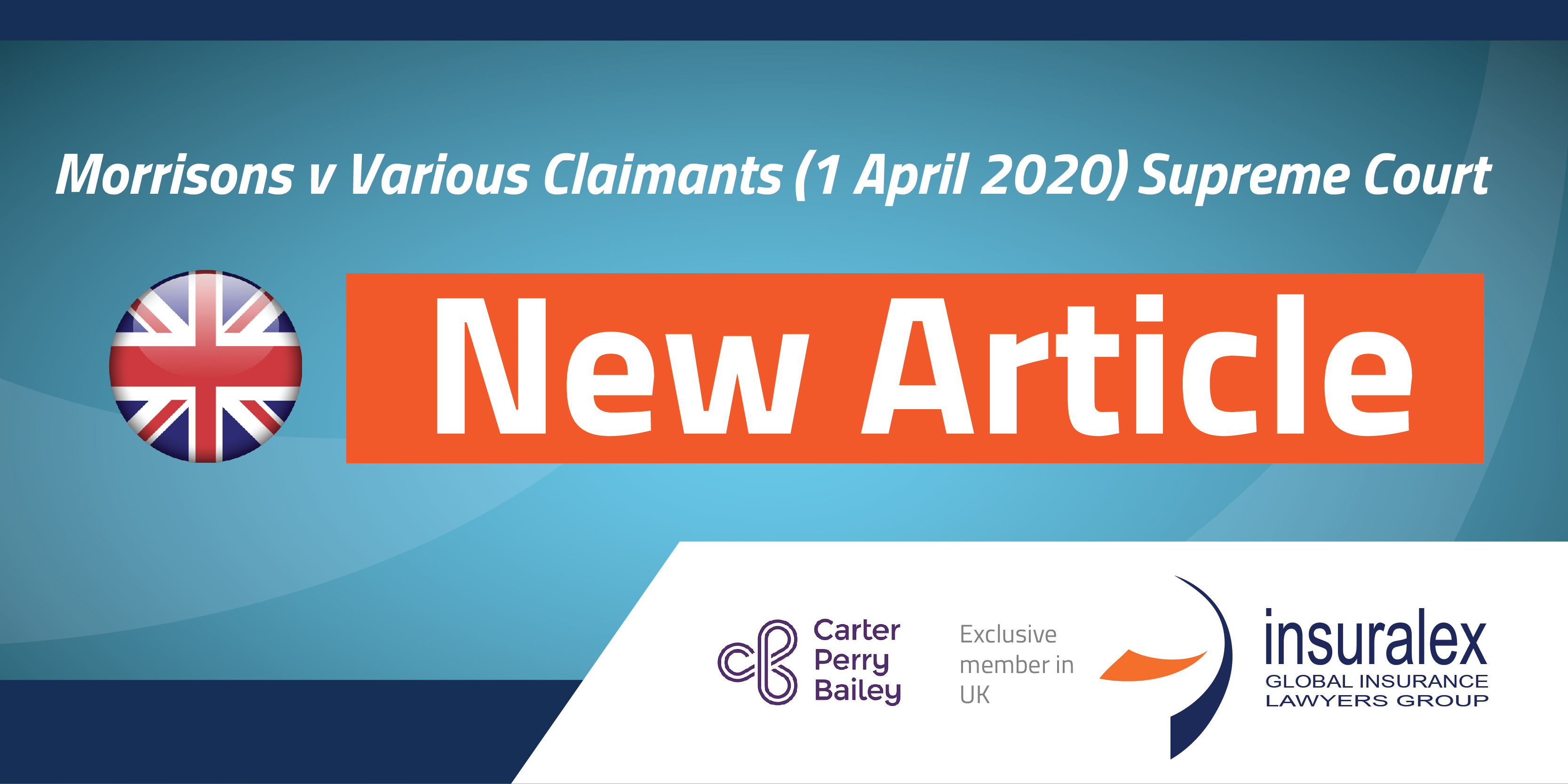 The Supreme Court ruling of WM Morrison Supermarkets Plc v Various Claimants [2020] UKSC 12 this month concerned whether Morrisons were responsible for the actions of an internal audit employee whose malicious conduct resulted in his misuse of data of about 100,000 employees. Over 9,000 of those employees claimed compensation against Morrisons in a representative action, and therefore the outcome was closely observed due to potential ramifications in terms of the overall value of such claims and guidance regarding rogue employees.

This unanimous Judgment will help clarify the application of the vicarious liability test when a rogue employee’s misconduct is primarily targeted towards the employer itself, rather than say a customer. The employer – as data controller – still needs to analyse its potential risks and comply with statutory data security requirements.

The internal audit employee had received a verbal warning in July 2013 in an internal disciplinary matter regarding the unpermitted use of the supermarket’s premises for his unrelated slimming aids business.

In his internal audit role, he was tasked to provide payroll data of nearly 126,000 of the supermarket’s employees’ data (including salary and bank account details) to the supermarket’s auditors. He had carried out this role the previous year, and completed the present task in November 2013.

However, between November 2013 and January 2014, whilst continuing to bear a grudge against his employer, he copied that data from his work laptop on to a personal USB stick, uploaded the file on to a publicly accessible file-sharing website and later in March 2014 anonymously sent a CD of the file to three UK newspapers (one of whom alerted Morrisons). He had taken steps to try to cover his tracks and implicate another employee. However, the subsequent investigation unearthed these and the criminal prosecution led to an 8 year prison sentence for the rogue employee.

Morrisons also incurred about £2.26 million, much of which involved identity protection measures for its employees.

About 9,000 employees (or former employees) pursued compensation against Morrisons. They sued for misuse of private information and breach of confidence, and for breach of statutory duty under Section 4(4) of the Data Protection Act 1998 (as it was at that time – the ‘DPA 1998’).

Addressing the issue of whether or not Morrisons were liable first, in 2017 the Trial Judge rejected the claim that Morrisons were primarily liable, but stated that the supermarket was vicariously liable. Morrisons unsuccessfully appealed that decision in 2018 and then appealed again to the Supreme Court. The Supreme Court hearing took place in November 2019.

The first question for the Supreme Court was whether Morrisons was vicariously liable for that person’s conduct, and if so:

In a unanimous Judgment, Lord Reed stated that Morrisons were not vicariously liable and “that the judge and the Court of Appeal [had] misunderstood the principles governing vicarious liability in a number of relevant respects”.

What is the test for vicarious liability and the answer on the facts of this case?

Read as a whole, the Supreme Court stated that Mohamud [2016] had not changed the law of vicarious liability. It has applied long-established principles to the facts of that case (which involved a Morrisons’ petrol station attendant who had had an altercation with a customer).

When considering whether the internal auditor’s wrongful conduct was committed in the course of his employment, the earlier Courts in the current Morrisons case, had also read some phrases such as whether motive was irrelevant out of context.

Mohamud involving the petrol station attendant had referred to the approach to ‘close connection’ in cases such as Dubai Aluminium Co Ltd v Salaam [2002] in which the House of Lords identified the general principle of the ‘best general answer’.

To summarise the 1 April 2020 Judgment, the test for vicarious liability is:

Therefore, reading in isolation the comment in the Judgment of Mohamud that “motive is irrelevant” was misleading, in the lower Courts of the current Morrisons’ case, as the question of whether the petrol station attendant “was acting, albeit wrongly, on his employer’s business, or was acting for personal reasons, was plainly important”.

His foul-mouthed conduct whilst inexcusable was within the ‘field of activities’ assigned to him. The assault on the customer was not unconnected due to the unbroken sequence of events. It was just the motive for why he become so enraged as to assault the customer that was irrelevant.

This close connection was not merely a closeness in timing or causation .

In the 1 April 2020 Judgment, the Supreme Court applied the test that it set out in paragraph 31 of its Judgment, as follows:

Therefore, Morrisons succeeded in its appeal and it was not liable for the claims by the claimants.

Whether the DPA 1998 excluded vicarious liability for breaches of its own provisions or for misuse of private information and breach of confidence?

As Morrisons were not found to be vicariously liable for the internal auditor’s wrongful conduct, the remaining questions (the issue of whether the DPA 1998 excluded vicarious liability for breach of statutory duty by an employee data controller or for misuse of private information and breach of confidence) did not need to be considered by the Court. As the issues had been fully argued, the Supreme Court stated that it was desirable for it to express a view. These would therefore be passing comments by the Supreme Court.

The Trial Judge in 2017 stated that the DPA 1998 did not exclude these and that EU legislation was intended to increase the protection of data subjects, not take away existing protections.

Morrisons relied on Majrowski [2007] that stated that:

“Unless the statute expressly or impliedly indicates otherwise, the principle of vicarious liability is applicable where an employee commits a breach of a statutory obligation sounding in damages while acting in the course of his employment.”

Morrisons argued that the DPA 1998 impliedly excluded the vicarious liability of an employer, stating that:

Section 13 (1) provided that “[an] individual who suffers damage by reason of any contravention by a data controller of any of the requirements of this Act is entitled to compensation from the data controller for that damage”. Subsection (2) makes similar provision in relation to compensation for distress. Subsection (3) provides that “[i]n proceedings brought against a person by virtue of this section it is a defence to prove that he had taken such care as in all the circumstances was reasonably required to comply with the requirement concerned.” and the seventh data protection principle (Schedule 1, paragraph 10) of the DPA 1998 also provided “the data controller must take reasonable steps to ensure the reliability of any employees of his who have access to personal data”.

The Supreme Court was not persuaded by this argument, although presented attractively. The 1 April 2020 Judgment contained comments that:

This Supreme Court decision brings to an end the first group action in the UK for this type of breach. The facts of this vicarious liability case were unusual and there were no other Judgments where the wrongdoing (in this case misuse of data) was designed specifically to harm the employer – the closest were those in which harm was intended to be inflicted on a third party for personal reasons.

The employee was pursuing a personal vendetta against the employer rather than his acts being to further the employer’s business. His motives were relevant.

This case highlights that it is important to scrutinise the acts that the employee was authorised to carry out, along with the chain of events both from a timing and causation point of view. When there is close timing or an unbroken chain of causation linking the provision of data for anauthorised use and ultimate misuse by that employee, that does not of itself satisfy the close connection test.

Whereas the Lloyd v Google decision in October 2019 favoured the data subjects in that representative action, who were seeking permission to serve a Section 4(4) DPA 1998 breach of statutory duty court claim outside the jurisdiction of England & Wales, this month’s decision in Morrisons may mean that the start of such representative actions against employers, particularly in the context of acts by an employee who bears a grudge against their employer, shall be approached with more caution. 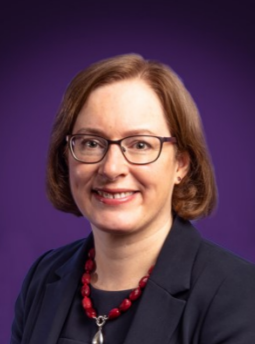