Welcome by The President Bill Perry to the new members of;

James Bowring held a speech on the subject “Debt collection in the in the London Market”.

The President welcomed everybody to London and hoped the meeling would be successful.

Luxemburg have been absent twice, an e-mail-alert will be sent lo them.

5 Approval of minutes of Annual Meeting

The minutes ofthe Annual Meeting in Chicago was approved.

Malters arising from Minutes not on the agenda:

No such malters were reported.

A thorough discussion ofThe Budget for 2013 was held.

It was unanimously approved as a broad draft Budget not to be uploaded to the website. A more detailed Budget will be presented in early 2013 when Bertjan de Lange has introduced the new software.

It was also decided to investigate whether the forming ofan Audit Commiltee would be appropriate.

Paper to be circulated.

Each member made a short presentation and gave an up-date ofthe latest in its jurisdiction.

The structure to incorporate Insuralex.

It was decided to approve the boards proposal to tum lnsuralex into a Dutch association according to article 2:26 and following articles ofthe Dutch Civil Code, (29 yes, 1 absention (Belgium) and Oagainst).

10 Feedback on seminar and its organisation

Feedback forms will be used in the future.

A proposal for smaller focus groups was made.

Local media contacts are needed from each member.

Enrique Belzuz presented a “How to” use The Members Only-area ofthe website and he al so reported on the hacker attack and measures taken. Host has been moved to Spain.

The President closed the meeting, which started at 10 am and lasted until 6:15 pm. 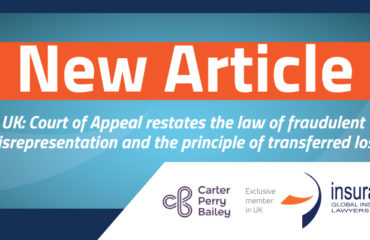 UK: Court of Appeal restates the law of fraudulent misrepresentation and the principle of transferred loss