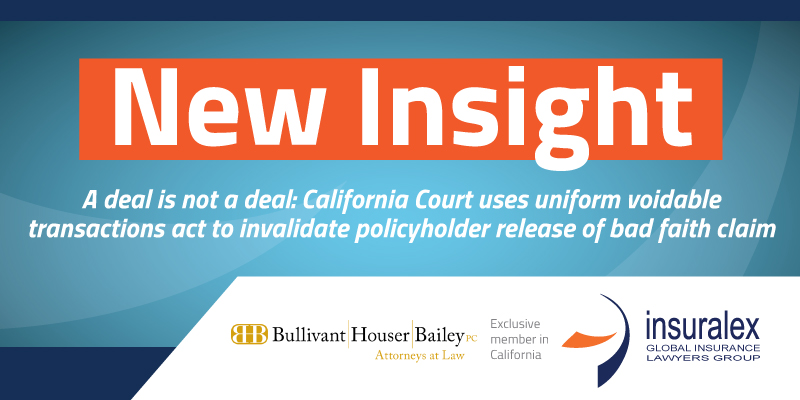 In a case that ought to remind us that there are few limits to the creativity of the policyholder bar, and that if a course of action seems too cute, it probably is, the California District Court of Appeal used the Uniform Voidable Transactions Act to invalidate a policyholder’s release of extracontractual claims.

On appeal from a judgment following the sustaining of a demurrer the Court of Appeal agreed the claimant stated a valid claim under the Uniform Voidable Transactions Act and could seek to have the bad faith release voided.

The Uniform Voidable Transactions Act, formerly called the Uniform Fraudulent Transfers Act is codified at California Civil Code § 3439 et seq. Similar versions of the act as construed in this case have been adopted in most other states. It treats as fraudulent “a transfer by a debtor of property to a third person undertaken with the intent to prevent a creditor from reaching that interest to satisfy its claim.” Kirkeby v. Superior Court, 33 Cal.4th 642, 648 (2004).  In Potter,the Court of Appeal held the policyholder’s bad faith claim was an asset subject to the act, that the transfer was made for the insurer’s benefit, and that a claim had been stated under the Uniform Voidable Transactions Act.

The insurer’s strategy here was somewhat unusual. While the appellate court didn’t comment on the disparity between the $75,000 paid and the original verdict or the eventual seven digit excess judgment, it would not be surprising if that disparity had an effect on the court’s perception of the case.  The court did comment in a footnote that the fact that $75,000 was paid while the original appeal was pending indicated the bad faith claim “had significant monetary value when the Release was executed.”

Going forward, it is important to keep in mind that a bad faith release that doesn’t include the claimant, and which seems too good to be true for the insurer (at least when viewed from hindsight) may not be enforceable if the consideration paid and release given appear to have been intended to foreclose the claimant from obtaining an assignment of the policyholder’s excess judgment bad faith claim.

Link to the article