A Recent Case Note On Construction…

In 2005 and 2006, Robert Barbee and his company R.L. Barbee Builders, Inc. (collectively referred to as “Barbee”) hired Shane Traylor Cabinetmaker, L.L.C (“STC”) to build cabinets and perform woodwork on homes that Barbee was building in Baldwin County. The relationship soured and in 2007, STC sued Barbee, alleging multiple causes of action, such as breach of contract, open account, unjust enrichment, and misrepresentation. In addition, STC sought a declaratory judgment to determine whether Robert Barbee had an ownership interest in STC, and if so, an additional declaratory judgment to establish that STC had been dissolved on March 28, 2007. The March 2007 dissolution date was important because STC argued that in 2006, Shane Traylor executed an “Assignment of Interest” transferring a 50% ownership interest in STC to Robert Barbee, but STC claimed that Robert Barbee did not execute that assignment of interest until March 28, 2007. Barbee filed an answer with counterclaims, alleging among other things, breach of contract, negligence, misrepresentation, slander of title, and unjust enrichment. Additionally, Barbee sought a declaratory judgment to resolve the question of its ownership rights in STC.

STC sued American Resources in Mobile Circuit Court, alleging breach of contract and bad faith. American Resources filed a motion for summary judgment, claiming that STC had not identified an “occurrence” that triggered coverage under the policy. After STC filed a partial motion for summary judgment, the circuit court heard oral arguments on the motions and granted American Resources’ motion. It held that there had been no occurrence within the meaning of the policy, and furthermore, that even if there had been an occurrence, STC’s claims would have been barred by policy exclusions. After the circuit court denied STC’s motion to alter, amend, or vacate its judgment, STC appealed.

On appeal the issues before the Alabama Supreme Court were: (1) whether Barbee’s counterclaim constituted an occurrence under the policy, (2) whether Barbee’s counterclaim alleged a cause of action for which American Resources was required to provide a defense and coverage under the “products — completed operations hazard” coverage provisions in the policy, and (3) whether American Resources was entitled to rely on the advice of counsel to deny STC a defense and indemnity.

The Court began its analysis by stating that coverage was triggered only when property damage or bodily injury was caused by an “occurrence.” Id. at *8. It quoted the policy language, which defined an “occurrence” as “an accident, including continuous or repeated exposure to substantially the same general harmful conditions.” Id. at *8. STC argued that Barbee’s counterclaim alleging defective cabinet work and wood working constituted an “accident” under Alabama case law. Id. at *10. The Court disagreed, stating that “this Court made clear [in Town & Country I] that ‘faulty workmanship itself’ simply does not constitute an accident or ‘occurrence’ within the meaning of a comprehensive general liability insurance policy [(“CGL policy”)] . . . .” Id. at *10–11 (quoting Town & Country Property, LLC v. Amerisure Ins. Co., No. 1100009, 2011 Ala. LEXIS 183, *16–17 (Ala. Oct. 21, 2011)). The Court explained that in Town & Country I it held that the determination of whether damage resulting from faulty workmanship is covered under a CGL policy “hinge[s] on the nature of the damage cause by the faulty workmanship.” Id. at *11 (emphasis omitted). In Town & Country I, the Court contrasted two cases, United States Fidelity & Guaranty Co. v. Warwick Development Co., 446 So. 2d 1021 (Ala. 1984) (“Warwick”) and Moss v. Champion Insurance Co., 442 So. 2d 26 (Ala. 1983) (“Moss”). The Town & Country I court stated that reading both Warwick and Moss together, faulty workmanship itself is not an occurrence but that faulty workmanship may lead to an occurrence if it subjects personal property or other parts of the structure to ‘continuous or repeated exposure’ to some other ‘general harmful condition’ . . . and, as a result of that exposure, personal property or other parts of the structure are damaged.

Id. at *12 (quoting Town & Country I, 2011 Ala. LEXIS 183 at *16). In the present case, STC readily conceded that Barbee’s counterclaims alleged only that STC’s work had not been performed in a workmanlike manner and required Barbee to repair or replace the cabinets and wood work. Id. at *12. There were no allegations of damage to the properties as a result of the faulty workmanship or loss of use of the properties. Id. at *12–13. However, STC attempted to argue that “by reasonable inference” Barbee’s counterclaim alleged damage to other property due to the faulty workmanship. Id. at *13. STC analogized the present situation to another construction defect case, United States Fidelity & Guaranty Co. v. Andalusia Ready Mix, Inc., 436 So. 2d 868 (Ala. 1983). Id. at *14. The Court was not convinced by STC’s analogy, noting that “unlike Barbee’s counterclaim, the complaint in Andalusia Ready Mix expressly alleged damage to property other than a defect in Andalusia Ready Mix’s own product . . . . and we decline to infer loss of use or other injuries based on speculation as to damage that was not alleged in the counterclaim.” Id. at *17.

In addition, STC argued that Barbee’s counterclaim covered “bodily injury” because Robert Barbee claimed he had suffered emotional distress and mental anguish as a result of STC’s representations that they would assign 50% interest in the company to Robert Barbee. Id. at *17–18. However, the Court stated that even without deciding whether mental anguish was included within the definition of “bodily injury,” there was no occurrence within the meaning of the policy because any alleged mental anguish arose from the misrepresentations regarding Robert Barbee’s ownership interest, rather than from the faulty workmanship. Id. at *18–19.

STC’s final argument was that Barbee’s counterclaim alleged harms for which STC would have coverage under the “products — completed operations hazard” coverage provisions. The Court noted that products — completed operations hazard provisions allow coverage for property damage arising out of the insured’s “work” or “product.” Id. at *19. Under the policy, this included “‘warranties and representations with respect to fitness, quality, durability, performance or use of’ the product or work.” Id. However once again the Court denied coverage, stating that STC had “not identified any breach-of-warranty claims alleged in Barbee’s counterclaim . . . .” Id. at *20.

The Court concluded by holding that because there was no damage to other property or loss of use from the faulty workmanship, STC had not presented evidence of an occurrence within the meaning of the policy that would trigger American Resources’ duty to indemnify and defend. Therefore, they affirmed the circuit court’s grant of motion for summary judgment in favor of American Resources. This ruling is important for two reasons. First, it shows that in Alabama construction defect cases, an “occurrence” only arises when damage or loss of use to other property arises from faulty workmanship, and the repair or replacement of defective work will not be enough to trigger an “occurrence.” Second, it shows that Alabama courts will not infer this damage to property or loss of use from a pleading, and thus, the property damage must be expressly alleged by the plaintiff in the underlying suit. 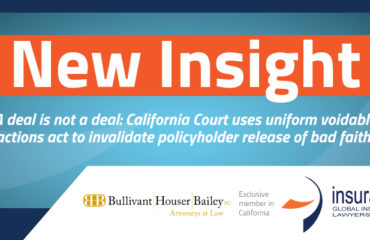