Legal forecasts: Predictions on Florida, Italy, Poland and the UK for 2013

Legal forecasts: Predictions on Florida, Italy, Poland and the UK for 2013 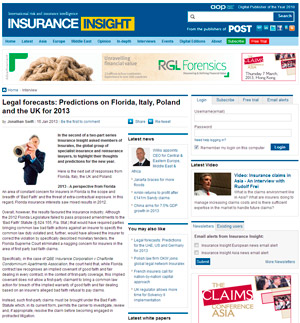 In the second of a two-part series Insurance Insight asked members of Insuralex, the global group of specialist insurance and reinsurance lawyers, to highlight their thoughts and predictions for the new year.

Here is the next set of responses from Florida, Italy, the UK and Poland.

2013 – A perspective from Florida
An area of constant concern for insurers in Florida is the scope and breadth of ‘Bad Faith” and the threat of extra-contractual exposure. In this regard, Florida insurance interests saw mixed results in 2012.

Overall, however, the results favoured the insurance industry. Although the 2012 Florida Legislature failed to pass proposed amendments to the ‘Bad Faith” Statute (§ 624.155, Fla. Stat.) that would have required parties bringing common law bad faith actions against an insurer to specify the common law duty violated and, further, would have allowed the insurer to correct the violation by specifically described monetary tenders, the Florida Supreme Court eliminated a nagging concern for insurers in the area of first party bad faith claims.

Specifically, in the case of QBE Insurance Corporation v Chalfonte Condominium Apartments Association, the court held that, while Florida contract law recognises an implied covenant of good faith and fair dealing in every contract, in the context of first-party coverage, this implied covenant does not allow a first-party claimant to bring a common law action for breach of the implied warranty of good faith and fair dealing based on an insurer”s alleged bad faith refusal to pay claims.

Instead, such first-party claims must be brought under the Bad Faith Statute which, in its current form, permits the carrier to investigate, review and, if appropriate, resolve the claim before becoming engaged in protracted litigation.

Thus, while Florida remains a sticky jurisdiction when it comes to the subject of bad faith and extra-contractual exposure, we have seen progress in the courts insofar as limiting the scope of first-party claims against insurers. We are hopeful this trend will continue throughout 2013.

2013 – A perspective from Italy
In the new year the Italian Insurance market will substantially evolve. The old ISVAP, the public autonomous entity equivalent to the UK”s Financial Services Authority, will cease to exist and will be substituted by the IVASS that is none other than a new branch of the well-respected Banca d”Italia, whose general manager is by operation of the law also the president of the new public body.

The new supervisory body should establish supervisory controls on life and non-life insurance/pension funds to bring down insurance costs and, consequently, tariffs.

The new structure and organogram were due to be operative by 1 January 2013 , but still very little or nothing has transpired to the public apart that the Italian insurance supervisor recently became a signatory to the International Association of Insurance Supervisors” multinational Memorandum of Understanding to harmonise their intervention with other EU and international insurance supervisors.

Apart from the regulatory aspect, insurance markets were shocked by Section 22 of the Decree Law 179 on 18 October 2012 (O.J n.245 of 19 October 2012) which introduced some major changes in the insurance sector.

First, according to the new art. 170bis of the Insurance Code, any compulsory motor liability insurance and/or ancillary covers will be limited by operation of the law to one year.

Secondly, the decree extended the statute of limitation for insurance rights to 10 years. The provision at law was deemed to resolve the problem caused to consumers by the lapse of dormant life policies that, after an act of 2008 were considered time barred if payment was requested, within two years from the maturity date with the insurers” obligation to donate unclaimed benefits to a public fund established at the Ministry of Economy and Finance.

This sudden and unexpected extension of the statute of limitation immediately created a reaction of non-life insurers to the major accountancy problems which the extension was causing.

Thirdly, the Decree-Law 179 abolished the prohibition for insurance agents, brokers and intermediaries registered under Section D of the Register of Insurance Intermediaries and/or for those recorded in the separate list for the European intermediaries, from entering into cooperation agreements among themselves for broking insurance purposes.

The agents, brokers and intermediaries must notify their potential clients of the respective roles each of them will perform in the intermediation process.

Last but not least, Decree Law 179 provides that life and non-life insurance should enable the policyholders to access the insurers” websites for the purpose of collecting updated information on policies, relevant terms, expiry dates and renewal procedures.

IVASS shall issue regulation providing guidelines for the information format and the security measures to be implemented to guarantee the insured”s privacy.

2013 – A perspective from the UK
Participants in the international reinsurance market continue to deal with losses arising from the natural catastrophes of 2012, notably Hurricane Sandy, a $25bn loss, and four further serious storms that each caused more than $2bn of damage in the US.

Issues of aggregation and allocation, business interruption and the maximum size of a single loss event are expected to arise.

Meanwhile, investment earnings continue to be below historical averages, claims inflation is apparent across many classes of business, and it is understood that the era of annually releasing redundant reserves may be coming to an end. In the light of this, insurers and reinsurers may be more resistant to claims.

In the English jurisdiction, lawyers are expected to be allowed in 2013 to operate for the first time on a contingency fee basis, adding to changes for the legal profession following the introduction of multi-disciplinary partnerships and the permitting of outside investment in law practices.

In the English litigation scene, hearing days in the Companies Court are fully booked until well into 2014. This follows the financial crisis and a number of cases to be heard involving actions against directors and officers.

2013 – A perspective from Poland
Personal injury claims in Poland are clearly on the rise and this tendency is likely to continue in 2013. There are a few factors contributing to this and those factors clearly reinforce each other.

There are more and more companies working solely on a success fee basis, approaching victims of accidents or medical malpractice, or their surviving relatives, offering them representation in damage claims for a percentage.

In addition, a clear tendency is visible in court rulings to award higher damages in particular for pain and suffering, which is another trend likely to continue.

On top of that, a recent verdict of the Supreme Court in Poland has confirmed that third-party insurance can be invoked to compensate for pain and suffering claims as well.

Legal Forecasts part I: Predictions for the UAE, US and Germany for 2013