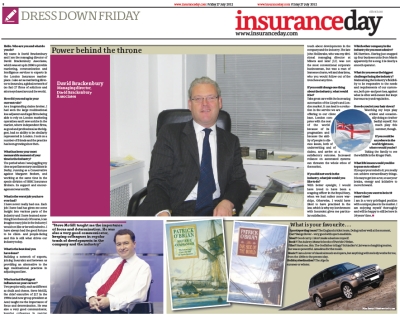 My name is David Brackenbury and I am the managing director of David Brackenbury Associates which was set up in 2006 to provide marketing, communication and intelligence services to experts in the London Insurance market-place. I also act as marketing director to Insuralex, a global network of (so far) 27 firms of solicitors and attorneys based around the world.

As a longstanding claims broker, I had seen the large multinational loss adjusters and legal firms being able to rely on London marketing operations and I saw a niche in the market, where independent firms, as good and professional as the biggest, had no ability to be similarly represented in London. I took on a number of friends and the practice has been growing since then.

The period when I was juggling my time as parliamentary candidate in Derby, running as a Conservative against Margaret Beckett, and working at the same time in the specie division of HSBC Insurance Brokers. Its support and encouragement was terrific.

I have never really had one. Each job I have had has given me some insight into various parts of the industry and I have learned something from them all. Of course, I can imagine many jobs in the industry I would not like or be well suited to. I have always had the good fortune to be client and people-facing and this is still what drives our industry today. 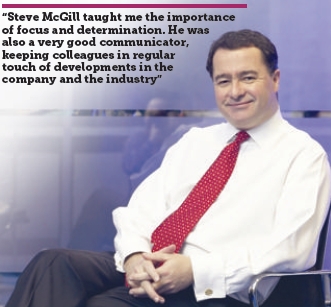 Two people really, each as different as chalk and cheese. Steve McGill, the chief executive of JLT in the 1990s (and now group president at Aon) taught me the importance of focus and determination. He was also very good communicator, keeping colleagues in regular touch about developments in the company and the industry. The late John Hollinrake, who was my divisional managing director at Minets and later JLT, was not the most conventional corporate businessmen, but was a man of inmense charm, wit and charisma, who you would follow out of the trenches any time.

Take great care with the increasing automation of the Lloyd’s and London market. It can lead to a reduction in the service we are offering to our client base. London competes with the rest of the world because of its pragmatism and because the ability of people to discuss issues, both of underwriting and of claims, and arrive at a satisfactory outcome. Increased reliance on automated systems can threaten the whole ethos of the market.

With better eyesight, I would have loved to have been a seagoing officer in the Royal Navy, when we had rather more war ships. Otherwise, I would have liked to have practised in the law, which is why my involvement with Insuralex gives my particular satisfaction.

RK Harrison. Having just snapped up for business units from Marsh apparently for a song, it is clearly a smooth operator.

Maintaining the industry’s flexibility to be responsive to the needs and requirements of our customers, both pre- and post-loss, against what is often well-meant but inept bureaucracy and regulation.

Watching my boys play cricket and occasionally doing so (rather badly) myself. Not much play this summer, though.

Taking the family to see the wildlife in the Kruger Park.

If you put your mind to it, you really can achieve extraordinary things. It is easy to get into a rut, so use your brains, energy and initiative to move forward.

Where do you want to be in 10 years’time?

I am in very privileged position with a unique place in the market. I am enjoying myself thoroughly and will be happy to still be here in 10 years’time