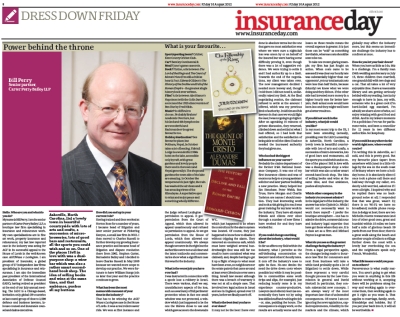 My name is Bill Perry.I am the senior partner of Carter Perry Bailey LLP, a boutique law firm specialising in insurance and reinsurance work. My own specialisations are in fine art work, property insurance and reinsurance; my last law reported case in the industry was acting for AGF in its successful appeal to the House of Lords in the well-known case AGF/Wasa v Lexington. I am president of Insuralex, a global group of 27 independent law firms specialising in insurance and reinsurance. I am also the immediate past president of the International Association of Defense Counsel (IADC), having retired as president at the end of our July annual meeting. The IADC is a Chicago-based, invitation-only global (39 countries at last count) group of close to 2,500 defence and business lawyers, inhouse counsel and insurance counsel and claims executives.

Having trained and then worked at Norton Rose for a number of years, I became head of litigation and later senior partner at Pickering Kenyon, a small law firm in WC2. I then moved to Charles Russell to further develop my growing insurance practice and became head of litigation and dispute resolution there from 2002. Stephen Carter, Bernadette Bailey and I decided to leave Charles Russell in May 2009 because we wanted more scope to develop our practice.We were fortunate to have William Sturge join us later that year and the practice continues to grow. 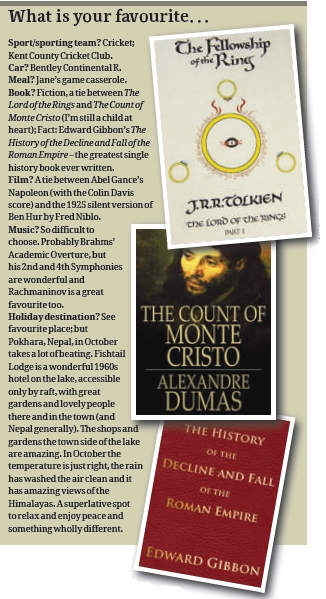 That has to be winning the AGF/ Wasa v Lexington case in the House of Lords. It was a real roller coaster ride. We won at first instance and the judge refused Lexington permission to appeal. It got permission from the Court of Appeal, which then allowed its appeal unanimously and refused us permission to appeal. So we got permission from the House of Lords, which then allowed our appeal unanimously. We always thought we were in the right but the authorities were not at all clear and the latest textbooks and commentaries show what a significant case this was for the industry.

I was instructed in connection with a specie loss: a robbery in Israel. There were various, shall we say, unsatisfactory aspects of the loss, such as a warranty of full perimeter protection when in fact one small window was not protected, a window which just happened to be the one the thieves chose to use and which gave access to the downstairs WC, which just happened to be where the control box for the alarm system was located. Of course, they just happened to know how to disable it without tripping the alarm. They removed an enormous safe, which must have weighed several hundred weight (but was still far too small to have contained what was claimed), and, despite having to get it up a flight of steps to what must have been a van,no neighbours nor the estate patrols that came around at least every 20 minutes ever saw a thing. Israeli law meant although there was a breach of warranty it was not at all a simple case. That involved two legal actions in Israel and one in England, spread over 13 years, before we finally saw it off.

What is the best deal you have ever done?

IIt may not be the best I have ever done in absolute terms but the one that gave me most satisfaction was where we were sure a night club loss was arson by or on behalf of the insured but were having some difficulty proving it, even though there was a lot of suggestive evidence. We were trying to settle it and I had authority up to a limit. Towards the end of the negotiations, my client was taken over. The new management decided I needed more lee way and, though I told them I did not need it, unilaterally raised my limit. At the final negotiating session, the claimant refused to settle at the amount I offered, which was my previous limit of authority. I told him and his lawyers in that case we would fight the case; I was not going to go higher. After an agonising 15 minutes of private discussion, they returned, climbed down and settled at what I had offered, so I had both that satisfaction and the satisfaction of being able to tell the client I had not needed the increased authority they had given me.

Probably the claims department of the former Irish National Insurance Company. It was one of my first insurance clients and was of enormous help to a young assistant solicitor and later partner building a new practice. Many helped but Jim Henshaw, Peter Webb, Ron Truss, Steve Morgan and Charlie Tarleton are names I should mention. They had interesting work and took a risk giving it tome; it was great training formy later work in the industry. They have all stayed friends and clients ever since through a number of new firms I have worked for and they have worked for.

So far as affects my field within the industry, what I perceive as the self-defeating concentration on lawyers’ (and others’) hourly rates. It cuts off the industry’s nose to spite its face. No-one denies the need the drive down costs where possible but while it may be possible to commoditise some work (trips and slips, for example), just reducing hourly rates is in my experience counter-productive. Lawyers (and others) react (as economically they have to) by using less skilled staff and rushing the job – or, alas, padding the hours. The consequence is sloppy work, so the results are actually worse and the losses on those results means the overall expense is greater; it is just those can be “sold” as something inevitable,whereas costs should be seen to be cut. To take one recent glaring example: my firm has just fought an action. When costs came to be assess edi twas clear our hourly rate was substantially higher than our opponents’, yet our total actual costs were less than half theirs, because (bluntly) we knew what we were doing and they did not. If the other side had invested more money in a higher hourly rate for better lawyers, their actual costs would have been less and they might well have got a better result too.

In my most recent trip to the US, I have been attending (actually, presiding over for IADC) a meeting in Asheville, North Carolina, a lovely town in beautiful country side with lots of arts and crafts, a succession of micro-breweries, lots of good bars and restaurants, all the sports you could wish and soon. One of the places I fell in love with was a dual-purpose shop: a wine bar which was also a rather smart second-hand book shop. The idea of selling books and wine at the same time, and that ambience, pushes all my buttons.

In the legal part of the industry, the answer has to be Clyde & Co. While I would not necessarily want to work there myself – I prefer the boutique atmosphere – one has to admire the drive,commercial nous and industry legal expertise that have got them where they are. It is a class act as a firm and Michael Payton is a great man.

From a legal perspective again, the changes being made to insurance law first for consumers and next from business will take a while (and probably quite a lot of litigation) to settle down. While these represent a very careful thought process by the Law Commission in general and David Hertzell in particular, they contain substantial new concepts. I am always wary of the most important law: that of unintended consequences. Of course I am not ignoring the new regulations, capital requirements, volatility in the markets and the climate, which globally may affect the industry more, but this seems an immediate challenge the industry has to confront at once.

When you have as little as I do, this is a challenge. I’m a family man (34th wedding anniversary on July 15, three children (two married), one grandchild) with two dogs and a cat. That all takes a lot of very enjoyable time. I have a reasonable library and am getting seriously behind with my reading. I am lucky enough to have in Jane, my wife, someone who is a great cook (I’m hard-boiled egg standard, I’m afraid); we share a love of wine, so I enjoy relaxing with good food and drink. And in my leisure moments I’m a politician: I’ve run for parliament twice, and been a councillor for 12 years in two different authorities. So I keep busy.

I’m writing this in Asheville, as I said, and this is pretty good. But my favourite place (apart from anywhere with Jane) is a little village by the sea on the south coast of Brittany where we have a holiday home. It is absolutely silent (I once took a phone call there and half-way through my caller, evidently a bit worried, asked me if I were all right. I inquired why and he replied there was no background noise at all; I responded that that was great, wasn’t it); there is no Wi-Fi; we have no broadband; mobile phone reception is dodgy at best; there are two Michelin rosette restaurants (and lots of other good ones, great and humble) within 15 miles; we have half a mile of glorious beach 50 yards fromour front door; there is a great walk along the beach and another couple ofmiles to a village further down the coast with a lovely bar overlooking the sea and the neighbours speak only French.Wonderful.

Perseverance is what really matters. You aren’t going to get what you want in anything in this life without working at it, accepting there will be problems along the way and working again to overcome them, then working again to get it right as you want it. That applies to marriage, family, work, friendships and hobbies. But if you put your back into it, it will all be worthwhile.